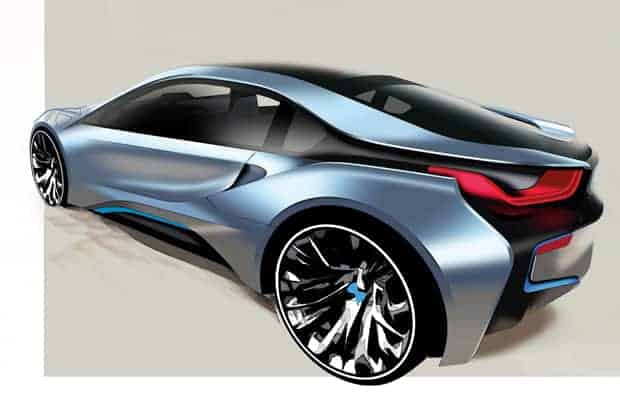 THERE’S A LOT BMW’s new i8 is not. It’s not the first all-electric car, the first gas-electric hybrid, or the first high-performance hybrid. But it may be the best of all three worlds—a perfect hybrid hybrid. It has the sexiness of a Tesla Model S, the fuel economy of a Prius, and the power to go from 0 to 60 much faster than a Porsche Panamera S E-Hybrid. All while costing $135,700 to the McLaren P1’s $1.15 million and the Ferrari LaFerrari’s $1.4 million.

The i8 has been hyped as the Next Big Thing since 2009, when BMW unveiled the concept car at the Frankfurt Motor Show (the rendering above is of the production vehicle). Its most Jetsons-esque quality is that it’s made from carbon-fiber-reinforced plastic, which is much stronger than steel and weighs a lot less. Its most environmentally friendly attribute: It can cover 20-plus miles on an electric charge alone and add nearly 300 more with its tiny, high-output gas engine before needing a refill or a recharge.

Henrik Wenders, who helms the “i” sub-brand, says the i8 is a response to issues like urban congestion, resource exploitation, and CO2 emissions—”a context that might not be beautiful to look at at first sight.” But with all of the luxury features befitting a BMW—including a 3-D digital display, all-wheel drive, and particularly illuminative headlights—the i8 is clearly worth a second look.

No. 01 Open-Door Policy
The i8’s doors have such an expansive wingspan that they wouldn’t have opened fully inside the typical garage. So BMW designed them to jackknife up to save horizontal space (and look badass).

No. 02 Glass Monkey
The i8 is the first production car to use Gorilla Glass—the scratch-resistant material used in smartphone screens—on its rear windshield.

No. 03 Feel The Noise
The engine runs so quietly that engineers amplified the sound by pumping it through the cabin’s stereo speakers, a psychological boost to owners who like to hear a hearty vroom-vroom.