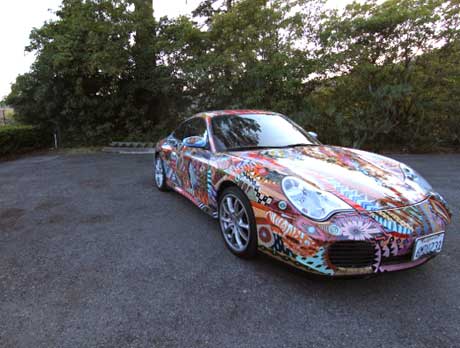 Northern California artist, Zio Ziegler, has painted his intricate, pattern-based work on a wide range of challenging found objects, but a recent commission to create a custom paint job for a Porsche 911 put his skills to the test. “I just make what I make, and that can be challenging for collectors because most pieces tend to be quite large. The 911, however, takes the cake for the most dynamic surface. It’s my Trojan horse,” he said, “bringing you art when you least expect it.”

It’s not difficult to admire the iconic Porsche model, but Ziegler seems to have fallen hard for German engineering and design during the painting process. “The lines were so organic I could practically close my eyes and let my hand find the origins of the design. I feel lucky to have painted it.”

The mobile canvas on wheels is an exciting idea, one that, as Ziegler put it, “changes perception with its speed and environment,” and we’re excited to see if this becomes a trend in the art world. Though the artist plans on sticking to more traditional two-dimensional surfaces for the time being, if the right car came along, Ziegler says “It may be too hard to resist.”

Check out the rest of Ziegler’s portfolio and see more pictures of the Porsche.