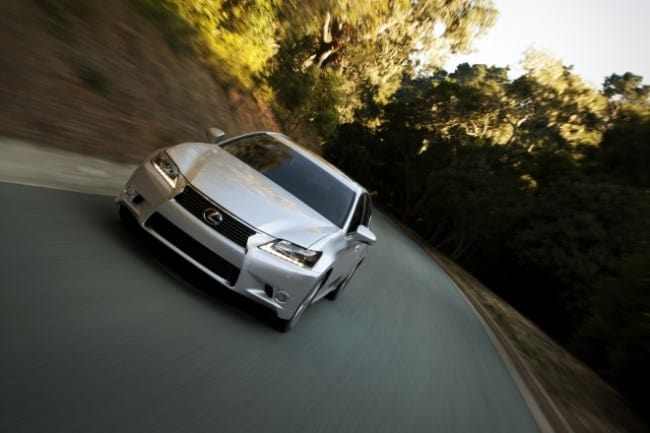 SITTING BEHIND the wheel of a Lexus is always a pleasure. It doesn’t really feel like you’re driving the GS 450h though – it’s so accomplished it almost drives itself.

The full hybrid GS 450h Luxury model, introduced in February 2012, does what it says on the tin well. It oozes opulence on the inside and has a heady mix of petrol and electric power underneath its skin.

The first clue that it’s a hybrid (apart from the ‘Hybrid’ badges discreetly stuck to each side of the car) is when you push the starter button. There’s no engine noise and no exhaust note – just a barely audible hum. You see, the Lexus operates in electric-only mode as much as possible, the petrol engine kicking in without a glitch when you get to around 30mph or when extra power is needed – e.g. climbing hills.

But you don’t need to drive the 450h like an eco-warrior if you don’t want to. It’s a true beast when not tootling along at ‘green’ speeds. And so it should be with a massive 3.5 litre V6 lump under the bonnet. Developing 286bhp with 197bhp worth of electric assistance makes it disgracefully rapid. It’ll hit 0-62mph in under six seconds and the needle will rise all the way to 155mph before an electronic limiter says enough is enough. But be warned, the power output can surprise you and sometimes the back end can skip out on greasy surfaces if you’re too heavy footed.

Despite the excitement the motor can stir up, the big GS appears fairly modest on the outside. Inside is a different story: the car includes a high specification that’s rich in advanced technology and features, combined with precision fit and finish and attention to detail.

The Lexus is definitely best for long distance motorway commutes. It can feel a little big and ungainly on twisty country roads but, with the help of its smooth auto gearbox, it glides effortlessly along the straights. Cabin contentment is assured with leather upholstery, dual-zone climate control and electrically adjustable front seats. The steering wheel is electrically adjustable, too, and incorporates paddle shifts. On-board entertainment is provided by a 12-speaker audio system with CD player, DAB tuner, Bluetooth and USB/Aux ports for connecting personal music players. A Mark Levinson premium surround system with 12.3-inch navigation and multimedia screen is available as an option on the 450h Luxury model, and came already fitted to my test car. It’s the largest screen on the market, yet it doesn’t dominate; in fact it seems at one with the Lexus’ interior.

The 450h Luxury grade has lots of other kit, but standing head and shoulders above the crowd is the blind spot detection system which is integrated into the door mirrors. This is incredibly useful, not to mention a great safety feature, especially when visibility is reduced on those dark, spray-ridden motorway commutes.

If I had a wallet fat enough to contain nearly £50k, then I might well walk into a Lexus dealership and buy a GS 450h. It’s less flashy than some of the German marques that many businessmen feel they must drive, but it looks after you just as well – maybe even better. It’s a cracking car – but I suspect it’s slightly too expensive for many – and maybe not quite cool enough for others. If this was America it’d be a different story – Lexus is seen as the crème de la crème of motoring there.